The 2013 British Atherosclerosis Society Autumn meeting was held at the Murray Edwards College, Cambridge University on the 5th-6th September 2013. It was organised by Professor Andrew Newby, Professor Sarah Jane George and Dr Jason Lee Johnson. The meeting was entitled “The Pathogenesis of Atherosclerosis: Nikolay Anichkov and his legacy 100 years on” and encompassed topics including the aetiology and pathogenesis of atherosclerosis, translation of insights from molecular biology into human disease and discovery of novel drug targets from genetic variant analysis. Generous sponsorship was provided by Amgen, Abcam and Panasonic Helathcare Europe Limited. 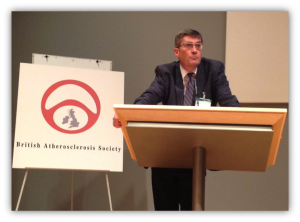 The first session subject area focussed on the pathogenesis of atherosclerosis. Professor Andrew Newby (University of Bristol) presented an introductory lecture outlining the work of Nikolay Anichkov which culminated in the induction of the “Cholesterol Theory of Atherosclerosis”. Professor Newby went onto discuss the role of cholesterol, inflammation and foam cell formation in atherosclerosis pathology and initiated a lively discussion on the use of rabbit versus murine models in atherosclerosis research. Dr Clett Erridge (University of Leicester) then presented his research on the role of toll-like receptor 2 and 4 in plaque inflammation. Dr. Erridge demonstrated that activation of these receptors by pathogen-associated molecular patterns in processed foods, lead to increased macrophage foam cell formation in vitro and enhanced atherogenesis in vivo. In the final segment of this session, Professor Peter Weinberg (Imperial College London) described how meticulous analysis of flow patterns and aortic lesion distribution, using novel statistical methods and computer models, demonstrated deviations from the widely accepted link between low or oscillatory shear stress and lesion formation.

The afternoon session was titled “From bedside to bench: insights from human atherosclerosis”.  The first talk in this session was given by Professor Gerard Pasterkamp (UMCU, Utrecht) whose work using the AtheroExpress Biobank of human atherosclerotic samples, has demonstrated associations between plaque proteins and intraplaque bleeding with the overall risk of cardiovascular events. Furthermore, Professor Pasterkamp presented his work demonstrating the association between a genetic variant in PIK3CG and intraplaque microvessel density. Next, Dr Jennifer Cole (University of Oxford) explained the opposing roles of membrane-bound toll-like receptors which induce cytokine expression, and intracellular endosomal toll-like receptors which have an anti-inflammatory role. Lastly, Dr Harry Bjӧrkbacka (Lund University, Sweden) discussed how circulating immune cells could be employed as biomarkers for cardiovascular risk. Specifically, Dr Bjӧrkbacka presented data from a 15-year follow up study of 700 patients in which low levels of circulating regulatory T cells and high levels of both Th2 cells and classical monocytes were associated with cardiovascular event risk.

Following a short break for refreshments, there was an AMGEN sponsored special lecture given by Professor Daniel Rader (University of Pennsylvania, image below).

Professor Dan Rader giving one of the Amgen sponsored lectures. Professor Rader described how associations with novel genetic loci and atherosclerosis can be used to advance pathological understanding and therapeutic development. Professor Rader focussed on how these associations lead to understanding the role of sortilin in hepatic LDL cholesterol clearance and degradation.The final talk of the day, the Hugh Sinclair Lecture, was given by Sir Professor Rory Collins (Oxford University, image below). Sir Professor Collins presented a compelling and extensively evidence based discussion, arguing that in the quest for novel disease targets, the main risk factors for cardiovascular events including blood pressure and high LDL cholesterol, should not be forgotten. 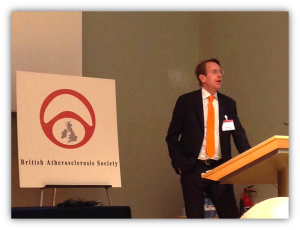 He argued that targeting these risk factors was likely to provide more therapeutic effect than the activation or blockade of novel targets. Following this lecture, posters were presented by young members of the society. Posters covered topics ranging from lesion initiation, inflammation and progression to mechanisms of thrombus formation and identification of biomarkers for cardiovascular events. This poster session concluded the conference for the day but the topics for the day encouraged many dynamic discussions and debates for the remainder of the evening.

The second day of the meeting started with a free communication session. The speakers were young investigators selected by the committee from the abstracts submitted prior to the conference. Firstly, Dr Emma Bailey (Imperial College London) presented her abstract describing spatial correlation between patterns of aortic endothelial permeability and multidirectional disturbed blood flow. Secondly, Dr Karina Di Gregoli presented data demonstrating that TIMP-3 expression in foam cell macrophages is inhibited by GM-CSF through the up-regulation of micro-RNA 181b. Next, Dr Eileen McNeill (Oxford University) presented her work showing that broad spectrum inhibition of CC-chemokines reduced monocyte recruitment in an angiotensin-II induced model of vascular inflammation and hypertension. Dr Helen Williams (Bristol University) then discussed work demonstrating the role of Wnt2 induced WISP-1 in vascular smooth muscle cell migration and intimal thickening. Finally, Miss Emma Yu (University of Cambridge) presented work elucidating the atherogenic role of mitochondrial DNA damage through altering vascular smooth muscle cell and monocyte behaviour. All of these abstract presenters were recipients of Binks Trust Awards and these were presented by Professor Sarah George. 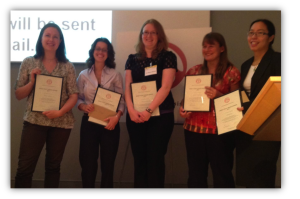 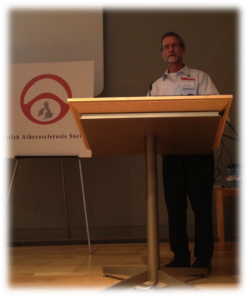 The final speaker was Professor Børge Nordestgaard who discussed the use of Mendelian randomisation to identify genetic traits for cardiovascular disease risk for the discovery of new targets and therapeutic approaches.Overall the conference combined the presentation of innovative and high quality science with informal and friendly scientific communication and discussions between peers.

We use cookies to ensure that we give you the best experience on our website. By continuing to use our site, you are agreeing to our use of cookies. You can change your cookie settings at any time if you want. OKRead more